First sited on Christmas Day in 1535, Barra was a shipyard for sailors, explorers and buccaneers from all over the world.

It has an important historic past in that the first Spanish explorers visited this area early in 1523, over 480 years ago. It served as an anchorage when Hernan Cortes continued his exploration of the “Southern Sea.”

A viceroy named it Puerto de Navidad (Port of Christmas), because the Spanish explorers landed on Christmas Day. Since the town he built was on a sandbar, the name was later changed to “Bar of Christmas.”

Barra de Navidad became a town of shipbuilders and buccaneers, its beaches being used to build vessels that would sail as far as the newly-discovered Philippines, in search of gold.

Today, Mexico and the Philippines share the same currency: the peso. In 1559, a decree from King Phillip II of Spain arrived in Mexico, ordering another fleet to sail west to the Philippines. All western Mexico was mobilized in support of this fleet. Roads were built to ferry supplies to Barra de Navidad where the ships were to be built. To this day, the main Guadalajara-Barra de Navidad road (Hwy. 80 through Autlan, a 5½ hour drive) is known to some as the Philippine Way. Food, planks, sails and rigging—all had to be acquired and transported to the port.

The expedition finally set sail on the 21st of November 1564, under the command of Lopez de Legazpi. To prevent any mutiny, Legazpi kept his crew in the dark about their true destination until the boats were already well on their way. Lopez de Legazpi remained in the Philippines and placed his 17-year-old grandson in charge of finding a way back to Mexico, a feat never previously accomplished. The attempt was successful, but when the expedition reached Acapulco, the crew was so exhausted; no one had the strength to drop the anchor. 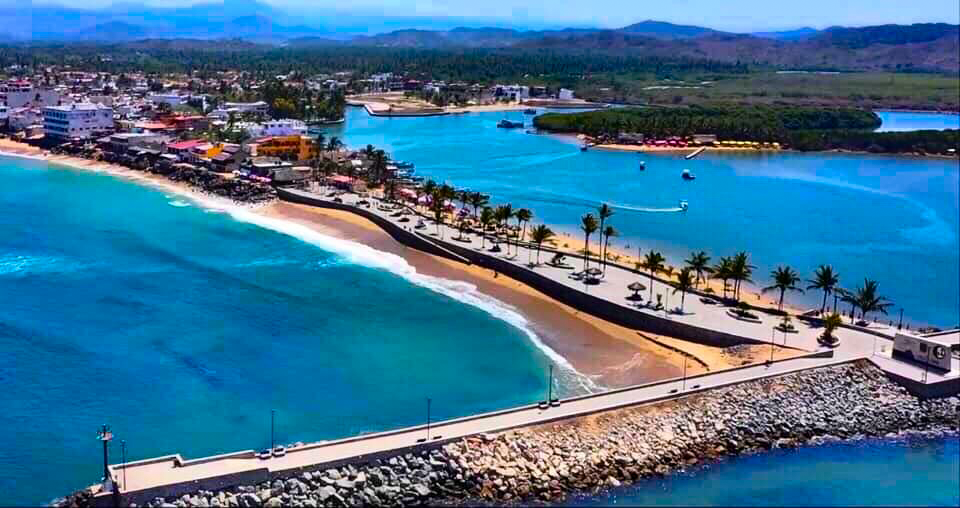 A small monument of Legaspi in Barra de Navidad’s plaza commemorates these explorations.  Tourists to Barra enjoy the finest fresh seafood in the world, including red snapper, dorado, marlin, sailfish, tuna and lobster. You’ll see the fishermen every morrning coming in with their catch of the day. Cultured oysters and clams are harvested daily from the lagoon in front of the small village of Colimilla, just a 5 minute trip by water taxi, from the town center.

The lagoon is a source for shrimp, clams and oysters, while the ocean is known for its fresh seafood, including fish, octopus and lobster. The surrounding mountains are great for hiking, bicycling and camping, while the Marabasco River to the south is perfect for swimming or trapping langostina (fresh water lobster).

Fruits and vegetables grown in the area include chile peppers, squash, mangoes, papayas, tomatoes, bananas, limes and coconuts. One of the largest coconut and banana plantations in the world is located just outside of Barra de Navidad.

The fruits and vegetables that are available in the markets in Barra de Navidad are all grown naturally and are very inexpensive. Many times trucks will come to town with fruits from other regions, and you will be able to sample watermelon of 5 varieties, cantelopes, pineapples and strawberries.

On the lagoon side there are numerous pangas (small open-bowed fiberglass fishing boats) for rent. If you take the water taxi across the lagoon to Isla Navidad or the friendly little village of Colimilla, the charge is 10 pesos each way. You will enjoy the unusual experience of getting around by water taxi.

The famous and exclusive  Hotel Grand Bay,  class resort is across the lagoon, and can be seen prominently close to town boasting one of the finest golf courses in the world. Check us out on Trip Advisor to see what people say about Villa Santa Barbara, Barra de Navidad!